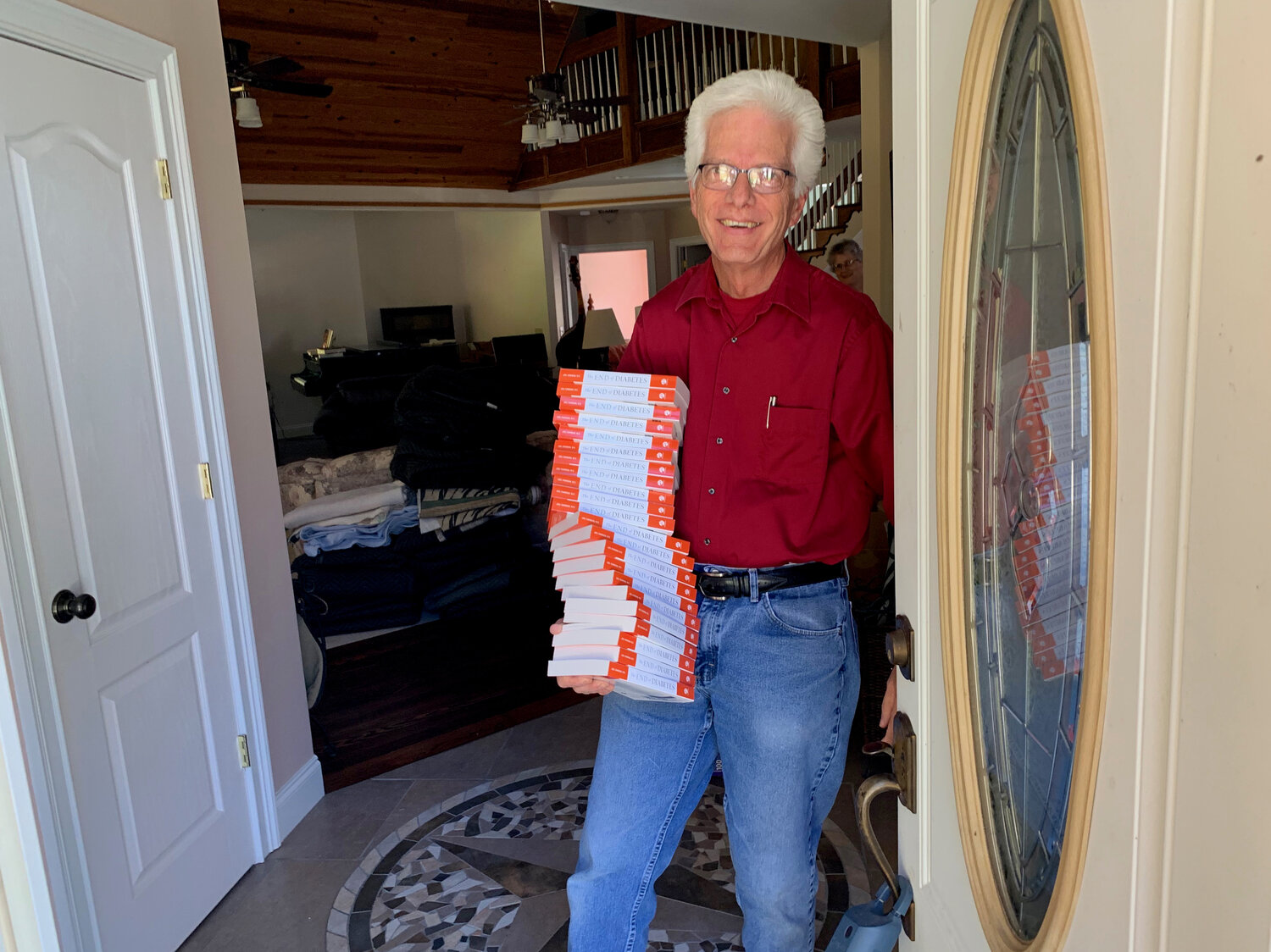 Steve Wickham, at home in Grundy County, Tenn., has developed an educational seminar with his wife, and fellow nurse, Karen, that they are using to help people with Type II diabetes bring blood sugar under control with less reliance on drugs.

Chains, saws and old logging equipment litter the back field of Wendy Norris' family farm, near the county seat of Altamont, Tenn. Norris used to be part of the local timber industry, and the rusted tools are relics from a time when health woes didn't hold her back from felling hardwoods.

"I was nine months pregnant," Norris says. "Me and my husband stayed about 10 or 15 miles in the middle of nowhere, in a tent, for a long time."

Those outdoor adventures are just a memory now. A few years ago, as Norris turned 40, her feet started going numb. She first assumed it was from standing all day at her job at a nursing home.

"But it wasn't," she recalls now. "It was that neuropathy, where my [blood] sugar was high and I didn't know it." Norris had developed Type 2 diabetes.

Grundy County, Tenn., has a long list of public health challenges, and Type 2 diabetes tops the list. The county is stunningly scenic; it also has one of the lowest life expectancy rates in the region.

Norris was relatively active. She also enjoyed sodas, sweets and frozen dinners. Meanwhile, diabetes runs in her family. So, when her diabetes diagnosis came down, her doctor prescribed insulin shots and told her to watch what she ate. 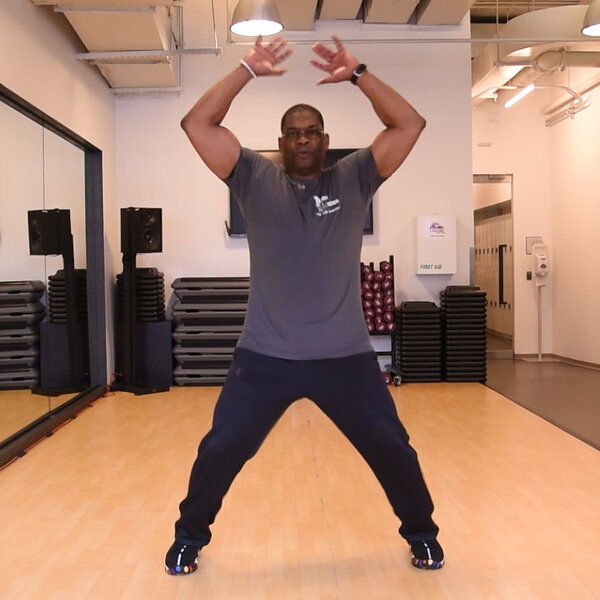 Get Fit — Faster: This 22-Minute Workout Has You Covered

"You're sitting there thinking, 'Well, what does that mean?' " Norris says.

Type 2 diabetes can be reversed with weight loss and exercise; but research shows that people need lots of help to achieve control of blood sugar with just a change in diet and lifestyle, and they rarely get enough support. It's easier for doctors and patients to rely primarily on medication.

Norris says trying to overhaul her diet by herself was confusing and difficult. And when things didn't change, the doctor just kept increasing her dosage of insulin.

But then Norris lost her health insurance. The injectable insulin cost her hundreds of dollars a month — money she simply didn't have.

Fortunately, that's when a couple of nurses who were members of her community stepped in to help — not with cash, but with crucial support of a different sort.

At the nonprofit Beersheba Springs Medical Clinic, a nonprofit clinic founded in 2010 to bring free or low-cost health care to the area, Norris was introduced to an alternative approach to taming her Type 2 diabetes — and the prospect of reversing her diagnosis altogether.

Retired nurses on a mission

In a former parsonage near the clinic, Karen Wickham ladles out lentil stew as a handful of participants in the evening's health education session arrive.

She and her husband, Steve, are white-haired, semiretired nurses who have dedicated their lives to what they call "diabetes reversal." They offer six-week seminars to Type 2 patients like Norris, who has also brought along her father and daughter.

"It's our purpose," Karen says. "Our purpose in life is to try to help make a difference — first in our community."

With slide presentations, the Wickhams explain the difference between sucrose and glucose and the science behind the fact that foods like potatoes spike blood sugar, while sweet potatoes don't. They preach eating as much fiber as a stomach can stand and dropping almost every kind of sweetened beverage. 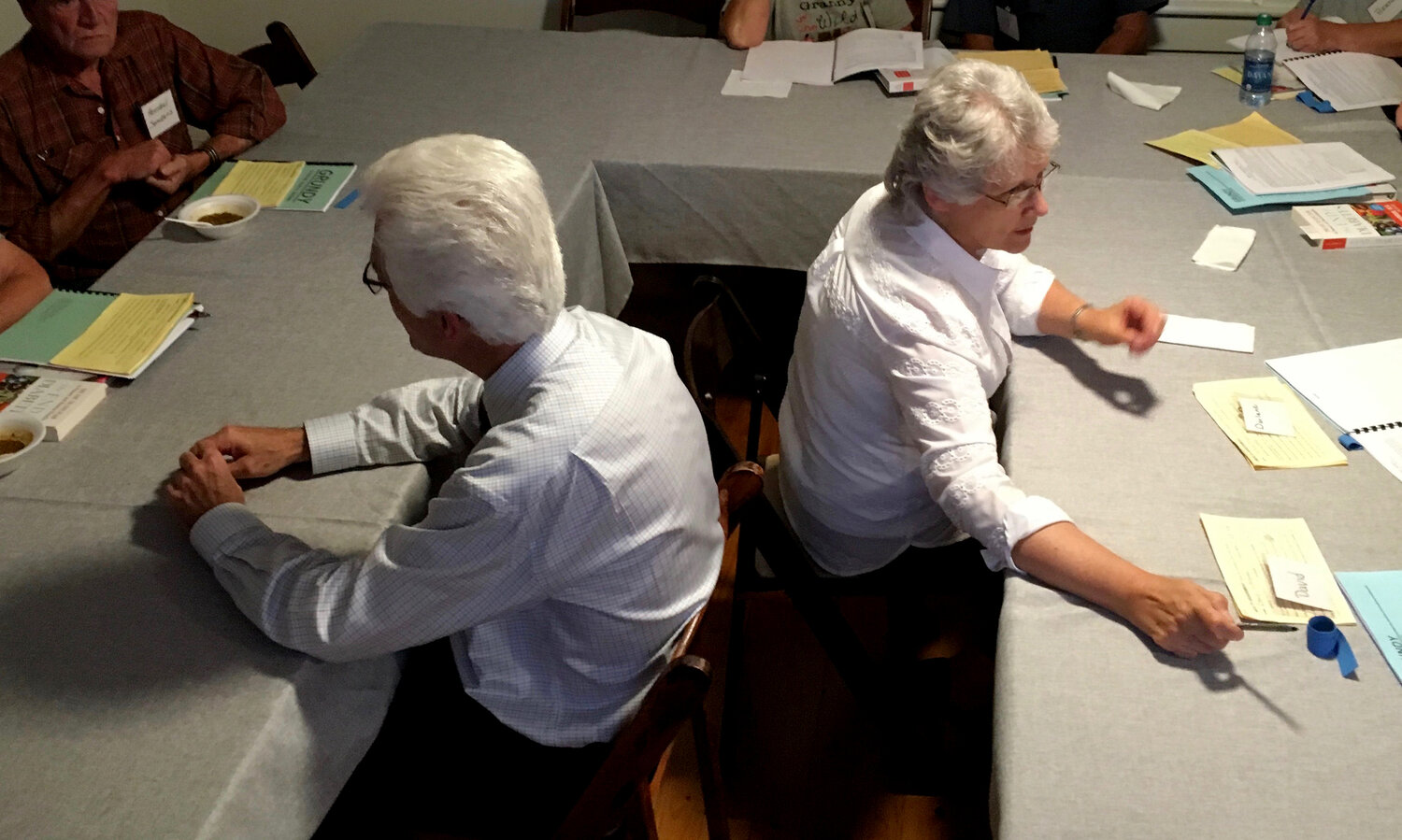 Steve and Karen Wickham explain course materials to participants in their seminar on Type 2 diabetes in Grundy County, Tenn. The six-week seminar offers detailed instruction on the biology of diabetes, diet and exercise — and provides plenty of individualized support.

Then they demonstrate ways to burn all those calories. On one evening, Steve invents the "Beersheba Boogie" on the spot, asking participants to raise their knees and pump their fists in place. 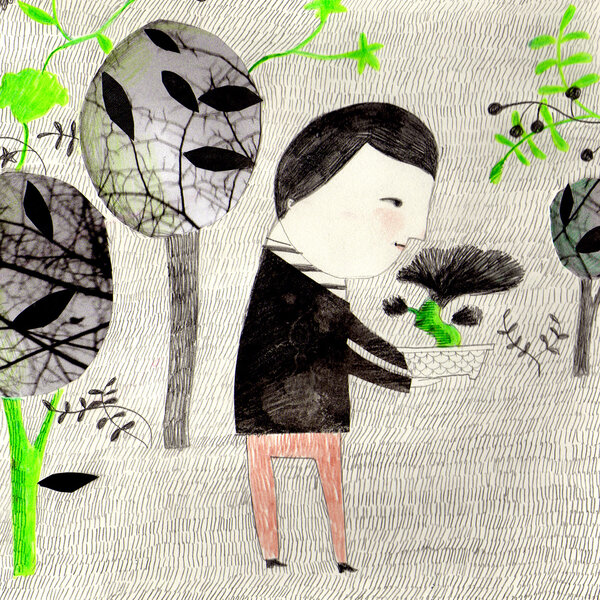 All these people will have to find a way to get active at home, because there's no gym anywhere close. There's not a proper grocery store nearby either, so healthy cooking can become a real chore. These community-wide obstacles reveal why it can be a struggle for people to maintain their health in rural America. But the Wickhams are working to overcome those barriers.

Steve calls out for applause as participants share their latest health stats — "Her blood sugar is going down! Give her a hand."

If it sounds like a revival meeting, it kind of is. Steve and Karen Wickham feel compelled to do this work as part of their Christian faith as Seventh-day Adventists — members of a denomination known for a focus on health.

"I think God holds us responsible for living in the middle of this people and doing nothing," Steve says.

The Wickhams originally moved to Grundy County to take care of ailing parents, and they ended up building their dream home there. They planted vast orchards, vegetable gardens and berry patches to help satisfy their vegetarian diet — a diet common among Seventh-day Adventists.

But once settled in their mountain retreat, the Wickhams grew disturbed by Grundy County's national health ranking: The county of 13,000 people ranks as the least healthy in Tennessee, by one annual measure. Grundy County has the shortest life expectancy in the state and an elevated rate of diabetes (16 percent of adults), which can eventually result in blindness, kidney failure and amputations.

"I had taken care of diabetic patients for so long, and I knew the progression," Karen says. "If you truly want the people to get better, you have to treat it with lifestyle interventions."

Overhauling one's diet and activity level is the obvious answer, but those changes are hard to start and even harder to maintain. 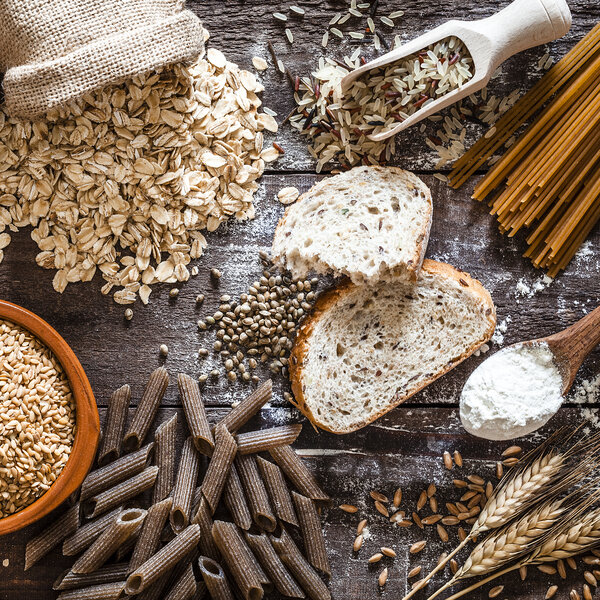 You Don't Have To Go No-Carb: Instead, Think Slow Carb

"Nobody, actually, will make all of the lifestyle changes that we recommend," Steve says. "But if you're making the kind of choices that lead you to a healthier lifestyle, then you get better."

Along with their lifestyle counseling, the Wickhams always give a disclaimer, advising people to consult with their doctors about their condition and its treatment. They also acknowledge that their seminars are not yet "evidence based" or backed by peer-reviewed scientific literature. It's one of the reasons they haven't been able to get government grants to fund their program directly.

But there are studies showing that people with blood sugar levels in the "prediabetes" range can get back to normal blood sugar by losing 5% of their body weight. 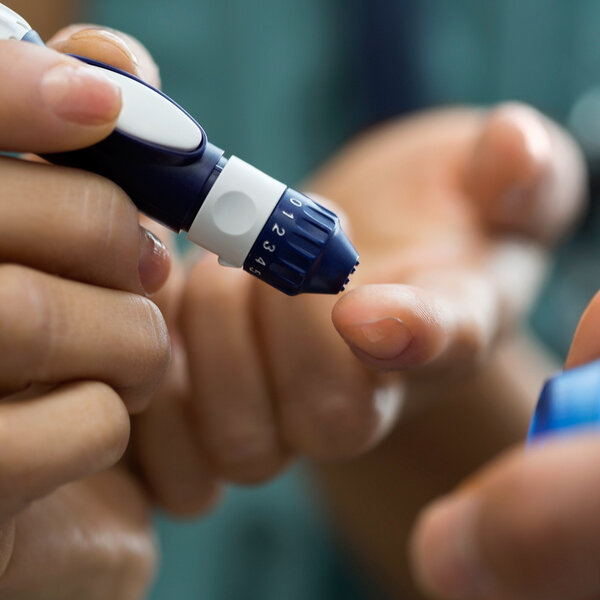 To Fight Off Diabetes, Latina Women Find Power In A Group

And weight loss and exercise have already been shown to lower hemoglobin A1c levels, which physicians use to monitor a patient's blood sugar over two to three months.

In addition, new research from Dr. Roy Taylor of Newcastle University in the United Kingdom shows promise for true remission.

"There just hasn't been the information about the possibility of reversing diabetes," Taylor says.

Most studies do show Type 2 diabetes, in most patients, marching in pretty much one direction. But Taylor says those studies also involve people who continue to gain weight, which is typical among diabetics.

"Doctors tell their patients, 'You've got a lifelong condition. We know it's going to steadily get worse.' Then they turn around, and their patients aren't losing weight or doing exercise, but they've given them this utterly depressing message," he says.

Taylor's research finds that if a patient loses 30 pounds or so, diabetes can be reversed in its early stages. Taylor prescribes a strict liquid diet and limited exercise — at first — so as not to stimulate the appetite. People with Type 2 diabetes need to lose fat from the liver and pancreas.

Ultimately, Taylor hopes better nutrition will become the preferred response to high blood sugar in the next decade.

"I think the main headwinds [against progress] are just conceptual ones — of scientists and doctors believing this is an irreversible condition because of what we've seen," he says.

Even the American Diabetes Association has been changing its views. The advocacy group has a new position on Type 2 reversal: "If a patient wishes to aim for remission of type 2 diabetes, particularly within 6 years of diagnosis, evidence-based weight management programs are often successful."

John Buse, chief of endocrinology at the University of North Carolina medical school, helped write the American Diabetes Association's revised guidance. "We've known, literally since the 17th century, that diet is the key to managing diabetes," he says.

But it's hard to write a prescription for lifestyle change.

"Doctors don't have the time to do it well, so we have often used the sort of short shrift," he says. " 'Eat less carbohydrates and walk every day.' That has basically no impact."

The Wickhams are doing their part to add to the scientific data, tracking the blood sugar of the participants in their program. And even the anecdotal, short-term evidence they've gathered so far is resonating far beyond Grundy County, and they've been traveling more and more lately. 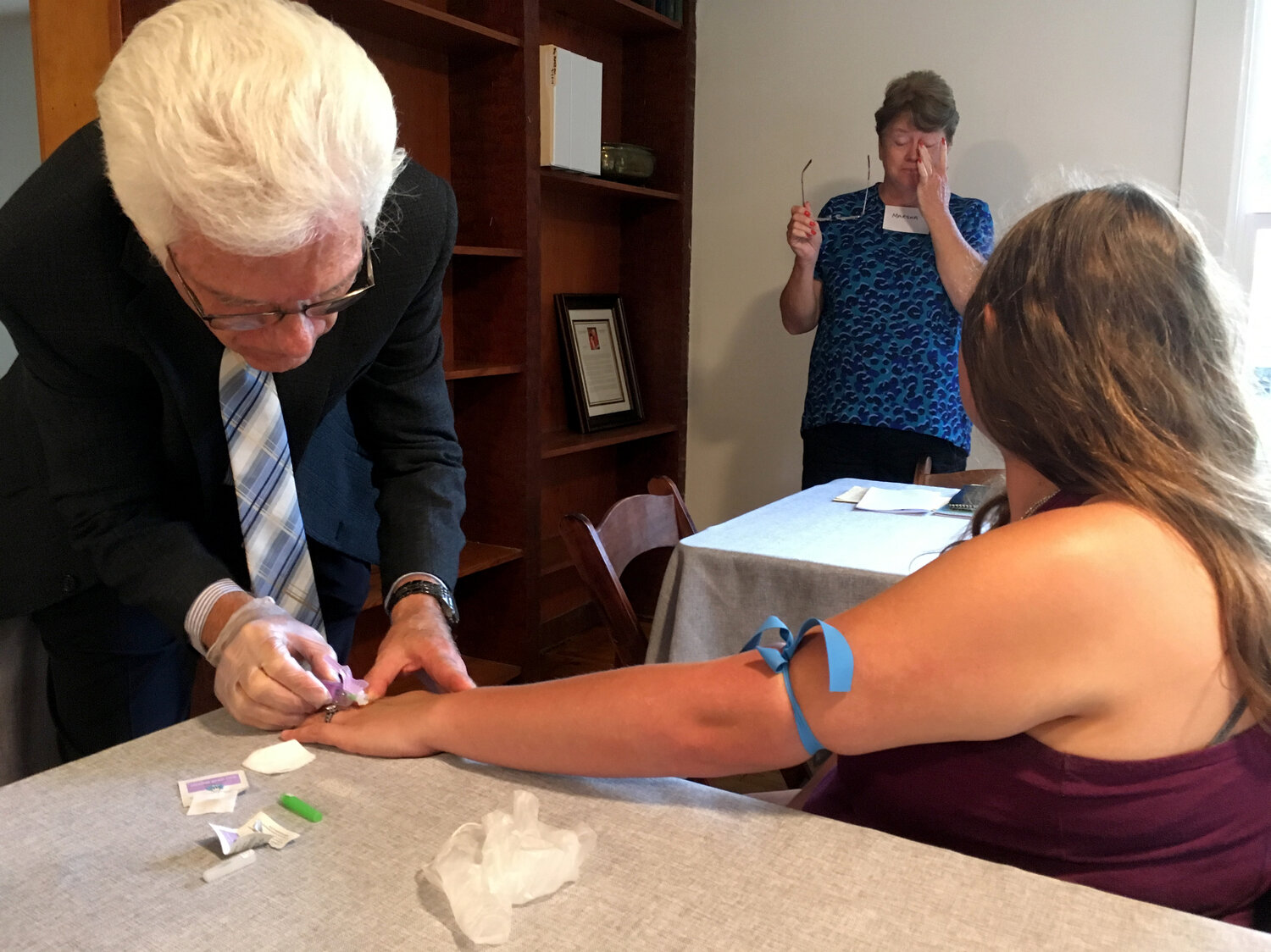 Steve Wickham, who is a nurse, draws blood at the midpoint of his and his wife Karen's six-week diabetes seminar. The hemoglobin A1c levels measured by the lab test help patients monitor whether the diet and exercise changes they're engaged in are making a difference in their blood sugar levels.

The couple just sold their retirement home so they can say yes to all the invitations they've received, mostly through Seventh-day Adventist groups, to present their program to other communities around the United States.

Meanwhile, Wendy Norris says the prospect of turning back Type 2 diabetes already has changed her entire outlook on health.

"I felt like I was stuck having to take three or four shots a day the rest of my life," she says. "I've got it down to one already."

This story is part of NPR's reporting partnership with Nashville Public Radio and Kaiser Health News.