Imagine visiting your GP and, instead of leaving with a prescription for medicine, being advised to join a community choir.

Don’t panic! That’s absolutely not what would happen if you went to the doctor with a cough. But there are some patients who doctors think could benefit more from creative and social activities than from medication or other treatments. Referring these patients to activities like singing, art lessons and community groups is called “social prescribing” – and it’s becoming more common in general practice than ever before.

In July, Naomi Paxton hosted a BBC Proms panel discussion on music and wellbeing with epidemiologist Dr Daisy Fancourt and GP Dr Simon Opher. Both are enthusiastic advocates of social prescribing and of using music to support health.

Proms Plus: Music and Health

A Proms Plus panel discusses social prescribing and how it can help patients and doctors.

Their conversation couldn’t have come at a more relevant time.

BBC News: 'Breaking is the one thing that saved me'

Social prescribers, who are usually attached to GP surgeries, know what’s going on in the community and can match patients to activities that support their needs. If the patient feels nervous about trying something new, the worker might even accompany them to an initial session.

“From July 1st, everyone in the country should have a social prescriber through their GP – and that's something that the NHS is paying for,” Dr Opher continues. “It's an exciting time for this. People are beginning to realise that medicine and pills aren't necessarily the best treatment for certain conditions.”

So what kind of health conditions might be improved by, say, music-making?

“Music can help everyone, but it can specifically help certain conditions – and we know this from research,” says Dr Opher. “One of the areas of the brain that really lights up when you listen to music is the precortical area. That's one of the last areas that gets damaged with dementia – so people with dementia, for example, retain their ability to enjoy music. I've seen more effect with music for patients with dementia than any kind of medication.”

Social prescribing won’t replace drugs or other medical treatments where they are needed, but the NHS thinks that it could help people with complex health and social needs. For example, research has shown that people who live with long-term health conditions, or who need support with their mental health, can benefit from singing in a choir.

There's also a growing number of choirs that support the mental health of people affected by physical health conditions.

Tenovus Cancer Care in Wales, for instance, organises weekly singing sessions for people affected by cancer, including carers and the bereaved. “The research that's been done here has shown that this reduces levels of anxiety and depression, and improves people's ability to cope with their condition,” says Dr Fancourt.

Just as importantly, taking part in creative activities can help people who are lonely, or who have social needs that affect their wellbeing – taking pressure off the NHS in the long run. Dr Opher’s practice in Gloucestershire was one of the first to trial social prescribing in a big way: “We did some early research that also showed that if you get people to engage with a musician, they're actually less likely to see their doctor or go to A&E,” he says.

91-year-old Eileen suffers from anxiety brought on by her dementia. But get her listening to music and the change in her is just startling! 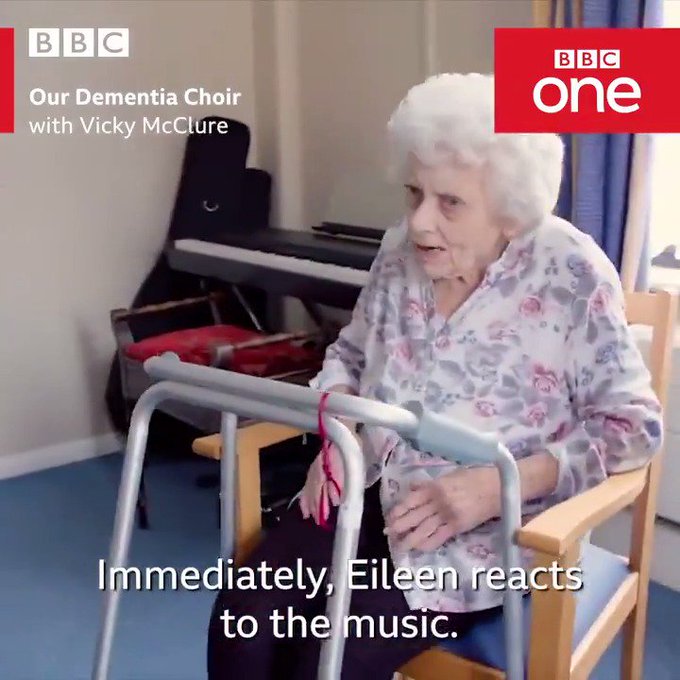 And you may not even need to leave your home to experience the benefits. Working with University College London, Dr Fancourt conducted a study with Eric Whitacre's Virtual Choir – an online-only ensemble whose performances are constructed from home videos sent in by singers from around the world. They found that “virtual” singers experienced the same emotional benefits as those who sang with a “live” choir, and that their feelings of confidence and self-esteem were significantly improved.

Taking part in creative activities can also improve physical health for some people.

For people who are sedentary, having a regular local group or class to attend can be important for increasing mobility and confidence. And there are a growing number of choirs for people who live with lung conditions. “The research here is suggesting that there are actually physiological benefits from the breathing involved in singing that can be incredibly effective for people who are trying to maintain their lung function and prevent lung deterioration,” says Dr Fancourt.

How do GPs and patients feel about social prescribing?

“Some doctors have difficulty with it, because it's not seen as a traditional model,” says Dr Opher, “and to be honest, some patients do, too – because they come to see you expecting one type of remedy, and you give them something else entirely. So what I say is: just try it once. About 90% of people who go for one musical therapy will go back and continue the course. As a society, we've got out of doing creative things. Patients need a bit a bit of a push sometimes, and a doctor can provide that.”

Dr Fancourt agrees. "It's critical that we stop seeing the arts as an “add-on”, and start to see them as absolutely fundamental to healthy lives,” she says. “In the same way we're aware of eating our five a day and getting our 30 minutes of exercise, we [should] also be making sure that we prioritise doing these creative activities – and don't consider that they're the first thing that can go as soon as our lives get a bit busier.”

So what kind of dosage would the good doctors recommend?

Dr Opher points to research from Australia that shows you need to participate in 100 hours of creative activities a year to gain a detectable health benefit – that’s about two hours a week.

And the best part? It’s impossible to overdose.

The BBC Proms run all summer. You can listen to every concert on Radio 3 and on BBC Sounds, watch the Proms on BBC iPlayer and attend each concert in person for as little as £6.

There's also the chance to get involved with the music making in Prom 66, when members of the audience are invited to join in singing the final theme of John Luther Adams' In the Name of the Earth on Sunday 8 September 2019. For more information about how to participate, visit the Proms website.