Even before they became deadly petri dishes for the worst pandemic in generations, many nursing homes were struggling to stay afloat and provide quality care.

But since the start of the coronavirus outbreak, nursing home operators have had to spend more money on protective equipment for staff and technology to connect residents with relatives who are no longer allowed to visit. Their revenues have shrunk because they are admitting fewer new residents in hopes of reducing the risk of infection.

The result is that some nursing homes, which often run on razor-thin profit margins, may be unable to pay their rent and other bills without government help.

“It could be a huge economic mess,” said Charlene Harrington, a professor emerita of nursing at the University of California, San Francisco. “It is possible that many nursing home chains could go bankrupt with the virus.”

Presbyterian Homes and Services, a Minnesota-based nonprofit operator of 16 nursing homes, estimates that the average 72-bed nursing home is spending an additional $2,265 a day on personal protective gear and an additional $1,500 a day on extra nursing staff.

At Meadow Ridge, a retirement community in Redding, Conn., with 62 nursing-home beds, executives have been forced to use Amazon or outside vendors to buy protective gear, said Kimberly Held, the community’s director of nursing.

“The pricing is unbelievable,” Ms. Held said. “I did have to order ponchos as a backup plan if we ran out of gowns. When we received our N95s, it felt like Christmas,” she added, referring to a type of mask that has been in short supply.

Nursing homes care for about 1.5 million people in the United States, and 70 percent of the 15,400 facilities are run for profit. While the financial picture for the industry, which also includes homes run by government agencies and nonprofits, was hardly rosy before the virus struck, it was especially precarious for many for-profit nursing homes.

Reimbursements from government programs like Medicaid are a main source of revenue for nursing homes, but operators have long complained those payments have not kept pace with the cost of care.

The industry is increasingly relying on the government for another form of support: The Department of Housing and Urban Development guarantees $20 billion in mortgages to more than 2,300 nursing homes — about 15 percent of the country’s total, up from about 5 percent a quarter-century ago. (Last year, the $146 million collapse of Rosewood Care Centers was the biggest default in the history of the mortgage-guarantee program.)

It can be pricey just to keep the doors open.

The ownership structure has proved lucrative to investors in major health care REITs, which typically own a mix of nursing homes, elder care facilities and medical buildings. But those long-term leases can be problematic during an economic slowdown, because many include clauses to increase their rent every year, according to regulatory filings.

“There wasn’t a lot of wiggle room in these lease deals,” said David Stevenson, a professor of health policy at the Vanderbilt University School of Medicine who has studied the nursing home industry. Mr. Stevenson was talking broadly about the industry and not any specific company.

Advocates for the elderly say care inevitably suffers when nursing homes face financial trouble. More than a half-million nursing home residents lived in facilities rated below average or much below average in the federal government’s five-star rating system.

Some of the details in the current crisis have been grim: An anonymous tip led to the discovery of 17 bodies in the on-site morgue of one complex in New Jersey, and the death toll has since risen to 70 people. That facility, the Andover Subacute and Rehabilitation Center I and II nursing homes, is part of small chain in New Jersey and Pennsylvania operated by Alliance Healthcare, which rents the properties from affiliates of a Chicago-area firm, Altitude Investments, according to regulatory filings. 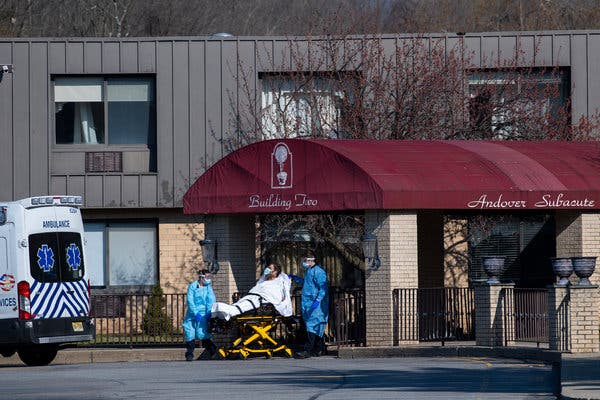 Altitude has had “more frequent communication” with the operator over the past month and has offered to provide assistance, said William Rothner, the firm’s president. He said Alliance had not requested any.

Genesis HealthCare, one of the country’s largest for-profit operators, exemplifies many of the pressures.

It rents the property for more than 70 percent of the 357 nursing homes it operates in the United States. Genesis’ shares trade for under $1, in part because of investor concern over its $1.6 billion in debt and the $5 billion outstanding on the value of its long-term leases. And nearly half the properties operated by Genesis scored two stars or lower in the government rankings.

Lori Mayer, a company spokeswoman, did not address Genesis’ financial situation and said any update would come when Genesis reports earnings next month. The company, she said, has taken a number of precautions to limit the spread of the highly contagious virus, which has torn through nursing homes from Washington State to New York.

The Times has identified more than 4,000 nursing homes and other long-term care or elder facilities across the United States with coronavirus cases. More than 36,500 residents and staff members at those facilities have contracted the virus, and more than 7,000 have died.

In hopes of avoiding devastating outbreaks, nursing home operators have had to admit fewer residents. The pandemic has rippled in other ways, too: Many hospitals are postponing elective procedures that usually require short rehabilitation stints, taking away another source of clients.

“A very large fraction of their most profitable business is post-surgical rehabilitation,” said Howard Gleckman, a senior fellow at the Urban Institute. “And most of that business is gone.”

Nursing home advocates have said the industry may need $15 billion from the federal government to ride out the crisis. The Centers for Medicare and Medicaid Services, a federal regulator, filled in some of that gap by advancing payments to nursing homes and providing up to $1.5 billion in aid. But industry executives said it was not enough.

“I do think there will need to be more money,” said Rick Matros, chief executive officer of Sabra Health Care REIT, which holds the leases on 296 nursing homes and several hundred other senior living centers. “The financial stress is real.”

Mr. Matros said his firm was prepared to provide rent relief to operators if necessary. Most of Sabra’s tenants should not need that help, but that could change if the crisis continues for several more months.

“We are looking at each tenant individually, and some are stronger than others,” Mr. Matros said.

But Ms. Harrington, the professor who has written about the impact of for-profit nursing homes on resident care, is concerned about operators’ taking federal money to stabilize their balance sheets or pay Wall Street landlords at the expense of taking better care of residents and staff.

“I am hoping that nursing homes will use some of their money for hazard pay to workers and also to bring in and train a lot of additional care providers,” she said.

Jessica Silver-Greenberg is an investigative reporter on the business desk. She was previously a finance reporter at the Wall Street Journal. @jbsgreenberg • Facebook