With the latest report out this week, scientists and medical researchers are increasingly examining the role of location in prevalence of the disease

A colored 3-D brain scan of a patient with Alzheimer's disease. Nearly 6 million people in the U.S. are affected by Alzheimer’s. SCIENCE PHOTO LIBRARY

Where you live matters in terms of Alzheimer’s disease risk.

Scientists and medical researchers know that advanced age and certain changes in the brain increase the chances of developing Alzheimer’s disease and related dementias. Now they are looking at what role location might play.

An emerging body of research is identifying counties and neighborhoods with higher prevalence of Alzheimer’s disease, which affects 5.8 million people and is the sixth-leading cause of death in the U.S. Researchers in the field of aging are seeking to find out if those locations have common risk factors associated with Alzheimer’s and if any of those risk factors can be reduced.

These researchers have sorted through government and medical data to find areas with high and low prevalence of Alzheimer’s disease. The data show, among other things, that overall prevalence is more highly concentrated in the Southeast and Gulf Coast states, including Florida and Texas, compared with Western states, such as Colorado and Arizona.

Such research is in its early stages and many questions remain as to why a location might have higher rates of Alzheimer’s disease. None of the studies claim that living in a certain location causes Alzheimer’s, but researchers see the information as potentially helpful in finding new ways to fight the disease.

“We’ve thought about Alzheimer’s as a purely biological disease and neglected the social determinants of health,” says P. Murali Doraiswamy, a leading Alzheimer’s researcher at Duke University. Those determinants include income, education and access to health care and nutritious food. “This is an incredibly important area that we have forgotten.”

Two studies released earlier this year focused on location. One found higher rates of Alzheimer’s in poor neighborhoods and the other, looking specifically at Ohio, saw higher prevalence in rural Appalachia compared with non-Appalachian rural counties.

A report released this week from UsAgainstAlzheimer’s and the Urban Institute parsed location data a different way, identifying 25 counties with the highest and lowest prevalence of Alzheimer’s disease for Blacks, Latinos and whites, based on 2016 Medicare data.

The Geography of Alzheimer's

Researchers are focusing on the places where Alzheimer’s disease appears. Black and Latino populations have higher prevalence rates than whites, but all three groups have higher rates in certain counties, a new study shows. 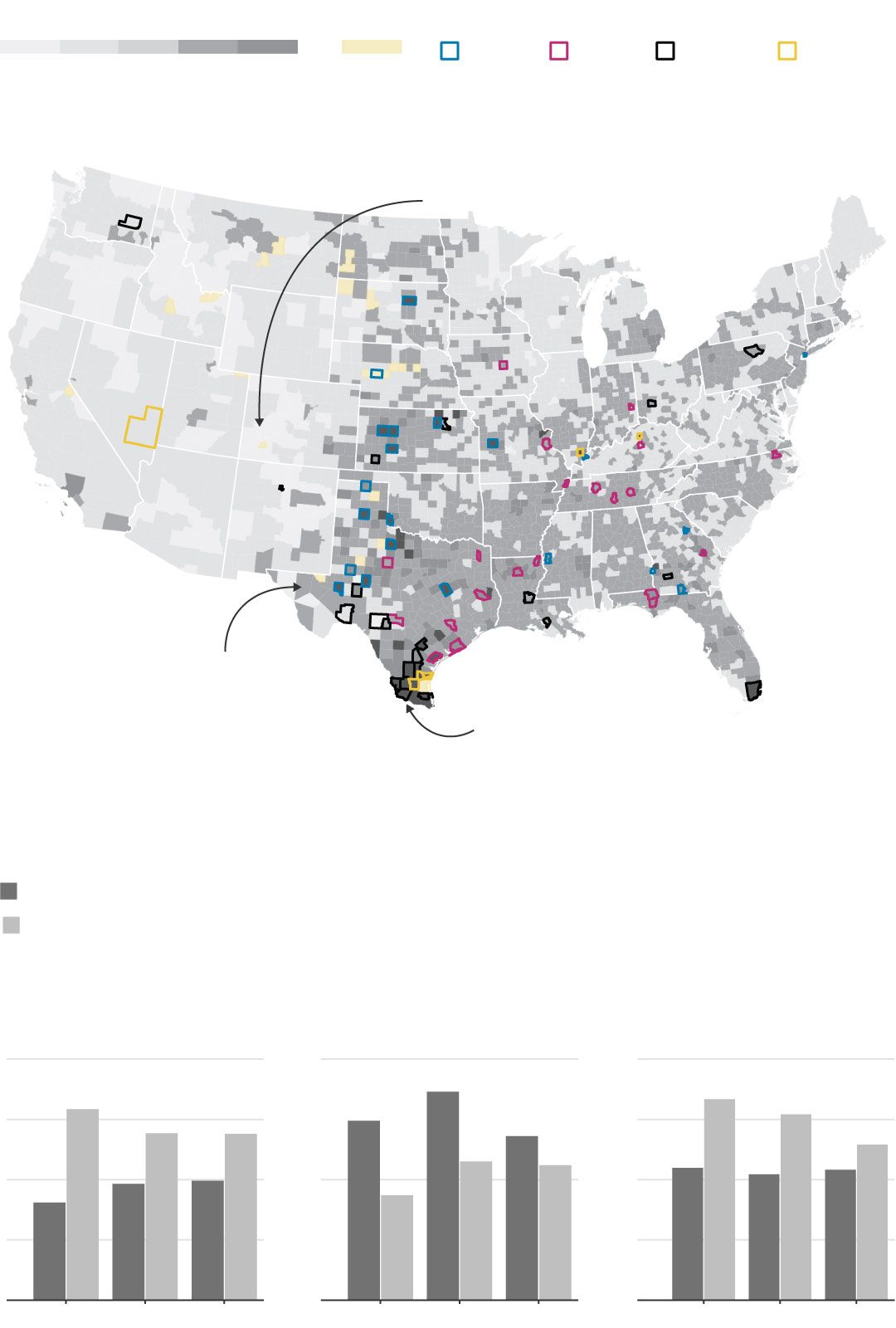 Top 25 counties with highest prevalence among:

Colorado had the most counties in the bottom 25 for lowest overall prevalence.

Texas, with the most counties of any state, had the largest share of counties ranked in the top 25 highest prevalence among Blacks, Latinos and whites.

Starr County, Texas, had the highest overall prevalence at 23.2%.

Socioeconomic profile of counties with highest and lowest rates of ADRD

Percentage of families in poverty

Percentage with a bachelor’s degree

*Counties where highest prevalence was found in more than one racial group.
Note: Prevalence data for all populations were not included for some counties.

The report focused on these three groups because they have the highest prevalence of Alzheimer’s disease, with 13.8% of Blacks, 12.2% of Latinos and 10.3% of whites diagnosed with Alzheimer’s or other dementias. Prevalence among Asian and Pacific Islanders, American Indians and Alaska Natives is less than 10% for each group.

The report doesn’t claim that conditions in a location cause Alzheimer’s disease, and questions remain on whether and how social and economic disparities play a role in health disparities. Older Blacks are twice as likely, and older Latinos 1.5 times as likely, to have Alzheimer’s as older whites.

“This is a descriptive study,” says Jason Resendez, executive director of the UsAgainstAlzheimer’s Center for Brain Health Equity. “We are looking for patterns that might exist and identifying them.”

The new place-centric studies can help identify gaps between where treatment and research are provided and where they are needed, say medical experts and researchers on aging.

“The country is aging quickly, and knowing where to put our resources can be really helpful,” says Jeffrey Wing, an assistant professor of epidemiology at Ohio State University’s College of Public Health. Dr. Wing examined 11 years of federal Medicare data for Ohio counties and found that poorer rural Appalachian counties in Ohio—many of which lack access to health care—had a 2%–3% higher prevalence of the degenerative brain disease compared to rural non-Appalachian counties in the state, in a study published online in May in the Journal of Alzheimer’s Disease.

The studies also pinpoint locations that might benefit from more intense and tailored intervention efforts to modify behavior and improve local living conditions that affect health. The Lancet Commission this summer reported that managing 12 specific risk factors, including obesity, smoking and air pollution, could prevent or delay about 40% of world-wide dementia cases.

“Until we find an effective cure, the most we can do and best we can do is to try to change some of the factors that might contribute to the onset of dementia,” says Stipica Mudrazija, a senior research associate at the Urban Institute who worked on the UsAgainstAlzheimer’s report.

In another of the studies released earlier this year, researchers at the University of Wisconsin School of Medicine and Public Health found that, based on autopsies, people who lived in the poorest neighborhoods at the time of their death were about twice as likely to have brain changes typical of Alzheimer’s disease as people who lived in the wealthiest neighborhoods. Researchers used the Neighborhood Atlas, a map developed by the University of Wisconsin that charts neighborhoods by socioeconomic status.

“We are in the baby steps of trying to understand what is driving this,” says Ryan Powell, a scientist who helped lead the study. He notes that people who live in disadvantaged neighborhoods often suffer from chronic stress, sleep disruption from sirens and thin apartment walls, and poor nutrition due in part to the lack of fresh fruit and vegetables. Those factors are associated with higher risk for Alzheimer’s, research has shown.

The data showed that counties with high prevalence of Alzheimer’s tend to have worse social determinants of health, including higher levels of poverty, fewer options for exercise, and less education.

“Across the board, educational attainment was the worst in those counties with highest prevalence,” says Mr. Resendez, with UsAgainstAlzheimer’s. In high-prevalence counties, less than 20% of the population had a bachelor’s degree or higher, compared with 28% to 32% in counties with the lowest prevalence. Research has shown that higher childhood education levels and lifelong higher educational attainment reduces dementia risk.

The report also found that people in higher prevalence areas had fewer opportunities for exercise, which can protect people from dementia by decreasing obesity, diabetes and cardiovascular risk. “You can say go ride a bike or take a walk, but if you live in a dangerous neighborhood or live next door to a highway, it’s not that easy,” says Mr. Resendez.

Alzheimer’s affects nearly 6 million people in the U.S. Do you think risks can be reduced, and how? Join the conversation below.

More than a third of the 75 counties with the highest Alzheimer’s prevalence for Blacks, Latinos and whites are in Texas, with a cluster of counties in the southern part of the state.

That doesn’t surprise Gladys Maestre, professor of neuroscience and human genetics at the University of Texas Rio Grande Valley, and director of the Alzheimer’s Disease Resource Center for Minority Aging Research in Brownsville.

The area is poor, largely rural, and has lower levels of education than some other regions. She believes that the prevalence is higher than reported. “Even though the numbers are high, we believe the reality is even worse,” she says. Yet, she says, community resources to support and treat those with Alzheimer’s are few.

She does think certain factors that are associated with Alzheimer’s risk are specific to a place, such as local levels of toxic metals in the water and air pollution, one of the 12 risk factors identified by Lancet.

“That is definitely place-related,” she says. “We need to learn more.”

Write to Clare Ansberry at clare.ansberry@wsj.com

Appeared in the November 17, 2020, print edition as 'Alzheimer’s Research Looks At Hot Spots.'