While many of us understandably swear by the stimulant, caffeine can trigger a stress response and give you a racing heart, jitters, anxiety, and prevent you from getting quality sleep. Coffee can also be dehydrating—caffeine is a diuretic, after all. All of the above can intervene with your body's optimal inflammatory response.

Not to say that caffeine is bad for you—because, in small amounts, it isn't. However, an excess of caffeine can cause anxiety (especially for those who are sensitive to it) and prompt your heart to beat faster, and this prolonged stress on the cardiovascular system may lead to chronic inflammation, specifically in the form of heart disease. "Caffeine can stimulate catecholamines, and if you are someone who suffers from anxiety and palpitations or irregular heart rhythms, stimulating catecholamines can exacerbate your symptoms," Eudene Harry, MD, the medical director for Oasis Wellness and Rejuvenation Center previously told Well+Good. (That being said, most individuals who do not have these symptoms can tolerate moderate caffeine consumption.) 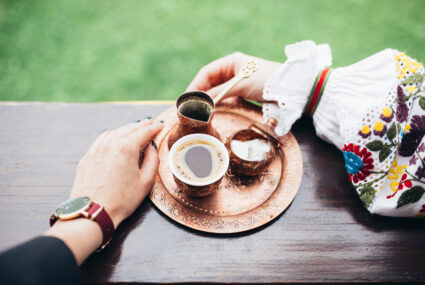 This Is the Type of Coffee Most Closely Linked to Longevity, According... 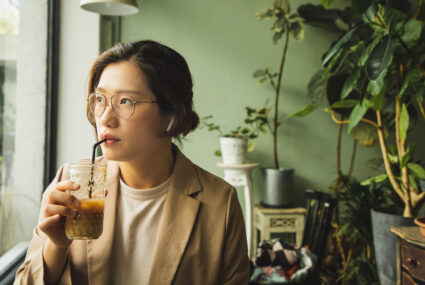 Here's What Happens To Your Mood When You Give Up Caffeine

“Like anything else, it's all about moderation,” says board-certified internist John Whyte, MD, MPH, author of the Take Control series. Talk about words to live by. “However, keep in mind that in addition to all aforementioned side effects, caffeinated coffee can also cause you to experience a heightened need to urinate and increase your frequency of headaches.”

The good news? There is a simple work-around: Decaf.

We know, we know. While it's certainly not as sexy—and coffee snobs love to hate on decaf because beans aren’t ever naturally decaffeinated, meaning companies need to extract the caffeine—there are many roasters that make surprisingly delicious, high-quality decaf coffees. And it's a simple statement of fact: Decaf coffee offers all the same anti-inflammatory benefits as regular coffee without any of the unwelcome side effects that may be triggered by caffeine.

“Regular coffee has anti-inflammatory compounds, so I look at decaf as a way for people to get the antioxidants and anti-inflammatory benefits of coffee without the caffeine,” says Lauren Manaker, MS, RDN, LDN, CLEC, CPT. Those benefits are not only bountiful, Manaker says, but they work to support your brain, heart, and can even help stave off chronic illness.

“For one, the antioxidants in decaf or regular coffee help reduce your risk of forming clots in blood vessels in your heart and brain," agrees Dr. Whyte. "These same antioxidants can also make you more alert and even reduce your the risk of type 2 diabetes.”

Learn more about the health benefits of coffee (decaf included) according to a dietitian by watching this video:

How to reap the most benefits from your mug of decaf

While all decaf coffee is considered anti-inflammatory, keep in mind that the way you serve your decaf can also add to (or detract from) its anti-inflammatory potential. “It’s important to remember that when preparing your decaf coffee, to try and limit pro-inflammatory additions like sugar—yes, even organic sugar or demerara sugar—to maximize the health benefits of your cup of joe,” says Manaker. Moderation is, again, key: We're not talking about your once-a-year Pumpkin Spice Latte habit; we're talking about starting every single morning with a drink that far exceeds the American Heart Association's daily recommended limit of six teaspoons.

Some health experts also say using artificial sweeteners isn't exactly a great choice for fighting inflammation either. A study published in the International Journal of Occupational and Environmental Health found that mice who were fed sucralose (the main ingredient in Splenda) daily throughout their lives eventually developed leukemia and other blood cancers. While the Food and Drug Administration (FDA) has deemed artificial sweeteners as safe, it's still something to be mindful of when trying to optimize the anti-inflammatory benefits of coffee.

To dial up the delicious flavor of coffee sans sugar or sweetener, Keri Gans, MS, RD suggests reaching into your spice cabinet. "Cinnamon is a great way to sweeten coffee and is actually known to have health benefits because of its antioxidant properties, such as may decrease the risk for heart disease and certain cancers and may help to balance our immune system," she previously told Well+Good. (Read: Sprinkling in cinnamon will actually increase the anti-inflammatory benefits of your cup coffee further.) Unsweetened versions of soy, almond, and oat milk all have a naturally sweet taste that will cut through the bitterness of coffee, too. Feeling extra daring? Try hot sauce—it tastes surprisingly delicious and will add even more inflammation-fighting potential.

Remember, however, that though decaf has a whole lot less caffeine than regular coffee, it isn’t totally caffeine-free. This can make even decaf a trigger for people who are particularly sensitive to caffeine. “Everyone has a different tolerance when it comes to caffeine, and while most of the caffeine has been removed during the manufacturing of decaf coffee, legally decaf coffee can still have around seven milligrams of caffeine per cup. But for context, most regular coffee has more than ten times that amount—think closer to 100 milligrams,” explains Dr. Whyte.

At the end of the day, there isn’t any way to net out how much caffeine 'diminishes' the anti-inflammatory benefits offered by coffee. Manaker also points out that since so much data shows that drinking regular coffee has anti-inflammatory effects, caffeine isn't considered a serious trigger for chronic inflammation, even in those who drink coffee every day. In fact, while caffeine on its own may be pro-inflammatory, according to the data, coffee with caffeine doesn't appear to necessarily spark inflammation in the body. That being said, caffeine can still increase catecholamines, neurotransmitters involved in the body's fight-or-flight stress response, and, if prolonged, could lead to inflammation.

“The main reason I would suggest decaf is so people can reap the benefits of coffee without the stimulation, stress symptoms, and dehydration—which for some people, like me, is a great thing,” says Manaker. In addition, Dr. Whyte also notes that you can drink decaf at night and typically not have the same sleep problems you might experience with regular coffee, which matters tremendously for your overall health. (And it’s great if you like the taste and smell of coffee.)

While no studies have been done to quantify the benefits of opting for decaf over regular coffee when it comes to anti-inflammatory responses if you find yourself dealing with some of the negative side effects of caffeine, switching to decaf will help diminish those without any effect on the antioxidant advantages.