New research at MIT might be a game-changer for Alzheimer's. But you don't have to wait to strengthen your brain's memory system. 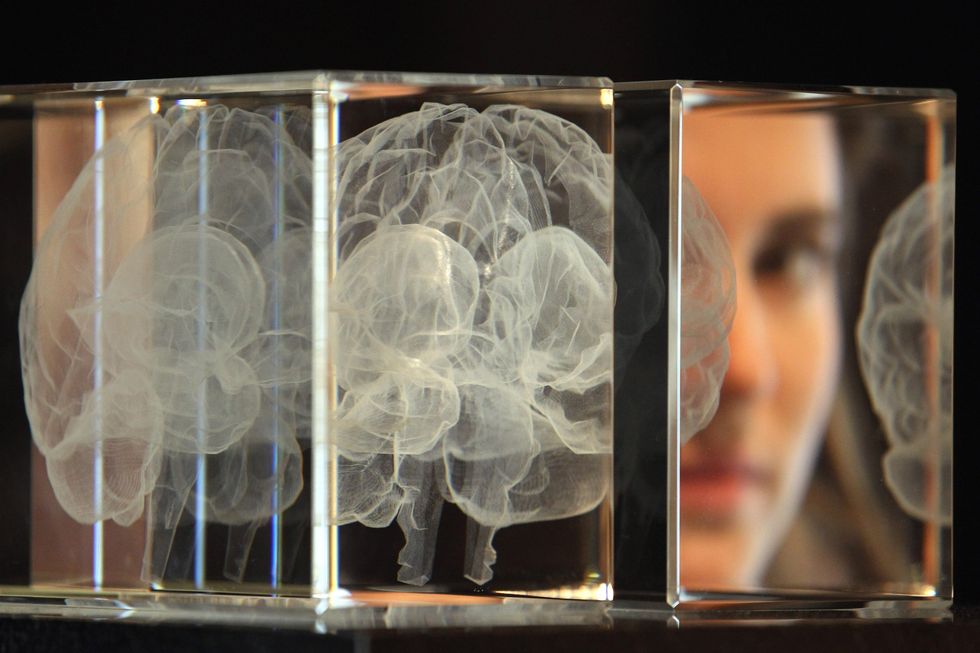 Wellcome trust employee Zoe Middleton poses behind an artwork entitled 'My Soul' by Katharine Dowson, which consists of a laser-etched lead crystal glass formation in the shape of a brain, and was created using the artists own MRI Scan, at Wellcome Colle

In an aging world, the rampant destruction of families and emotions due to Alzheimer’s disease is increasing. Around the planet, forty-seven million people are living with the disease at an annual cost of $236 billion (when other forms of dementia are factored in).

The estimated 5.4 million Americans suffering from this disease require 18.1 billion hours of unpaid care each year—an especially daunting reality during a time when Medicare and Social Security are under attack, as many other costs exist. By 2050 Alzheimer’s treatment and care is expected to top $1 trillion, bumping Medicare costs up by 360 percent.

Eli Lilly’s recent attempt at a cure has set the company back hundreds of millions of dollars and may result in thousands of layoffs. High hopes for its drug, solanezumab, were quashed after a recent failed late-stage clinical trial; the company’s stock has fallen 11.6 percent in the last two weeks.

Solanezumab targeted beta-amyloid deposits in the brain. For the last twenty-five years, researchers have speculated that deposits of the amyloid-β peptide “initiates a sequence of events that ultimately lead to AD dementia.” Thus far companies like Eli Lilly and Biogen have failed to produce potential remedies using this hypothesis.

This has not stopped research, however. Earlier this week neuroscience professor Li-Huei Tsai, who is also the director of MIT’s Picower Institute for Learning and Memory, announced the results of a potentially game-changing early-stage trial.

In a forthcoming Nature article, Tsai and her co-authors report LED lights flickering at a frequency that stimulates gamma oscillations at 40 hertz substantially reduces beta-amyloid plaques in mice. Targeting the brain’s hippocampus, a critical region in memory formation and retention, researchers temporarily suppressed these proteins.

As with all such trials, the researchers remain cautiously hopeful. Tsai says,

It’s a big ‘if,’ because so many things have been shown to work in mice, only to fail in humans. But if humans behave similarly to mice in response to this treatment, I would say the potential is just enormous, because it’s so noninvasive, and it’s so accessible.

Forty hertz is the typical gamma oscillation in human brains; these waves range from twenty-five to a hundred hertz. (Trials in Tsai’s lab at other levels were not effective.) Since 2009 researchers have been able to induce gamma waves in mice using optogenetics, a technique first dreamed up by Francis Crick in the late nineties that utilizes light in order to influence cellular activity in living tissues. It is now considered a breakthrough method for changing neuronal behavioral patterns.

Tsai and her team found that an hour of stimulation at forty hertz resulted in a 40-50 percent reduction in plaques while enhancing gamma oscillations. The proteins returned to their original levels within a day, leaving researchers to wonder if longer courses of treatment will more effectively, or even permanently, reduce protein growth.

While the rush for a cure continues, preventive measures are becoming increasingly important. Meditation has been shown to influence gamma activity, while listening to binaural beats might yield positive results.

Movement is among the most important facets of memory control and retention. One of the exercise’s main benefits is neurogenesis, which includes the production of IGF-1 and BDNF, proteins that are protective against dementia. Keeping active significantly increases your brain’s hippocampal volume, resulting in improved memory.

One of our age’s most damaging effects is the outsourcing of memory that instant access to technology offers. Studies have shown using GPS reduces hippocampal volume; checking the internet for every question instead of thinking through ideas and seeking alternate means is another memory-draining habit that has become commonplace.

Perhaps most interestingly is the importance of cognitive variety, flexibility, and cultivating an ability to consider opposing beliefs. As with bones, our brains operate best when met with resistance. Social interactions and daydreaming are essential for memory retention as well. Engaging in creative pursuits and flow states are ways to strengthen your memory system, as are learning new languages and instruments—basically, anything that challenges your current skill set.

Turns out that light, a longtime metaphor for spiritual realization, is equally critical in brain health. We know the damaging effects of your device’s blue light and its role in the suppression of melatonin, which affects sleep cycles, which affects memory. This potential breakthrough at MIT might prove that a different shade reverses such effects. Fingers crossed, though in the meantime plenty of methods to strengthen your memories are available now.

Derek Beres is working on his new book, Whole Motion: Training Your Brain and Body For Optimal Health (Carrel/Skyhorse, Spring 2017). He is based in Los Angeles. Stay in touch on Facebook and Twitter.